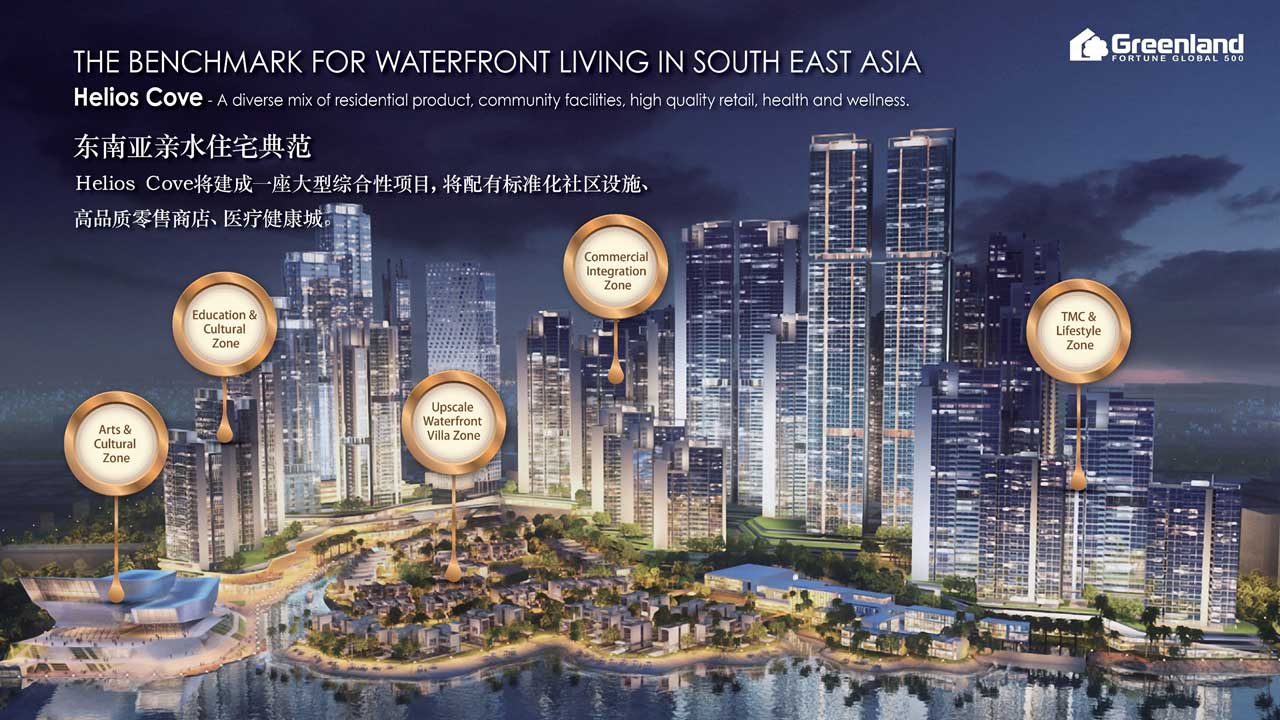 He said Johor’s growth has been invigorated by the launch of several mega foreign property developments which have boosted the local economy because of their spillover effects.

These companies have committed huge investments within Flagship “A” of Iskandar Malaysia, which he said was a boon for Johor’s sustained growth despite the present global economic uncertainties.

Some 13 local and foreign companies are now actively involved in developing the proposed new Iskandar Waterfront City in Danga Bay with a cumulative gross development value (GDV) of RM125 billion on the western corridor stretching from Johor Bahru to Nusajaya,

This massive urban development spread over 15-years will be jointly undertaken with Iskandar Waterfront City Berhad, (IWCB), which is also a Johor State Government-linked company.

Greenland will invest RM2.4 billion to acquire 128-acres from IWCB under Phase 1 of the project, which will showcase a snow world theme park, an opera house, a hospital specializing in Chinese traditional medicine and a school.

It is expected to transform the Eastern Corridor into Southeast Asia’s new lifestyle destination akin to Australia’s Gold Coast. The RM3 billion project will offer many tangible and intangible economic returns and benefits when it takes off this year.

It is designed to integrated local people into the development as it will have components catering to the needs of the younger generation, the business community, senior citizens and those looking for jobs, sports and recreational
activities.

Khaled welcomed such investments from China, noting that this was the tangible result of 40-years of strong China-Malaysia bilateral and business ties.

“I welcome their long-term strategic interest to jointly transform Johor Bahru into a modern international waterfront city and destination,” he said at the signing of a jointventure agreement between Greenland Group and Johor-based IWCB here today.

IWH, a Public Private Partnership involving Federal, State and Private interests, is the master developer of some 1,620ha (4,000-acres) of prime waterfront land in Johor Bahru.

The Johor Government, through its state investment arm – Kumpulan Prasarana Rakyat Johor or KPRJ – has 40-per cent shareholding in IWH. The Federal Government also has equity in IWH through its sovereign wealth fund, Khazanah Nasional Berhad.

Under the agreement, the Shanghai-based Greenland Group will jointly-develop Tebrau Bay Waterfront City with IWCB. This is its second investment in Iskandar Malaysia.

Last April, it also invested RM600 million to IWH for joint-development of 13.6-acres in Danga Bay, where a RM2.2 billion integrated mixed property project is coming up, including the recently launched “Jade Palace” luxury condominiums.

The company is also known as the builder of skyscrapers, with three of its towers ranking among the 10 tallest in the world.

Xu Jing said Greenland was “extremely upbeat” about growth prospects in Iskandar Malaysia as the special economic zone was spearheaded by the Malaysian government.

“We’ve undertaken urban development in over 80 cities throughout China. We’re keen to share the experience with IWH as our long-term joint-venture partner and help transform Iskandar Malaysia into an international destination,” he said.

For IWH, the joint-venture would enable it to leverage on Greenland’s forte in mixed commercial development, including high-end hotels and residential towers, to reshape its waterfront land in Danga Bay and the Tebrau Bay.